To celebrate the recent 40th anniversary of The Godfather I shall now relate a true life crime story.

It all started on Valentine’s Day, which is pretty appropriate because the hubz decided that this year, instead of celebrating Valentine’s like every one else does with flowers/chocolate/miscellaneous romantical sundries (which we never do anyway), we should celebrate the anniversary of the St. Valentine’s Day Massacre.

I really didn’t know much about the whole Massacre thing, but after doing some research, I’ve decided that I’m glad I didn’t live in Chicago back then. Those guys were hard core. Wikipedia it. It’s fascinating and gory…just like any celebration of love should be!

So after we’ve had our St. Valentine’s (Massacre) dinner, Nana presented Mags with the best surprise the little lass has ever seen. It was a goldfish and we named her immediately. It was a tough race between “Dorothy” and “Fish” but eventually “Dorothy” won out. You see, Elmo has a fish named Dorothy and one must emulate Elmo as much as possible. Obviously.

Things were going really well. We got Dorothy set up in her new “house,” we visited her every morning, we fed her and screamed the correct pronunciation of her name, “Doofy, DOOOOFFY!!” every time we saw her. And then things went south. Unfortunately, I was unable to get a photo of Dorothy before she met with her demise. The cause of death was unknown, but we just chalked it up to the fact that the fish was, well, a fish. These things happen, right?

I must say, my father-in-law pulled off the most perfect fish switch-out I’ve ever seen. In a matter of hours, Dorothy 1 was replaced with Dorothy 2 and a friend for back up. He even added a castle to Dorothy’s house to sweeten the deal. The man’s a master. These new fish were a heartier breed called platies. They’re smaller than goldfish, but still quite orange so as to fool any unsuspecting two-year-old’s you’re trying to pull one over on. Just file that one back in your memory bank in case you ever need it. And you will need it…oh, yes, you will.

Since one of the new fish was already named Dorothy and the other fish had spots on it, I asked Mags if Dorothy’s friend was named Spot. Seemed pretty harmless. She looked at me as though I were the single most idiotic person in the world and said, “No, Mama. Pat.”

So, for a while there, Dorothy and Pat were doing really well. Until the other morning when we realized that Pat really does sleep with the fishes now. Eeeesh. Dorothy was going kind of crazy and I personally think, based on her swim patterns, she was trying to communicate something about “leaving the gun and taking the cannoli,” but I really can’t be too sure.

At this point I’ve learned to be pretty pessimistic about these fish…and I’ve also begun to think that there may be a killer among us. Especially since the hubz woke me up this morning with a coded message. (We speak in code now when referring to the abysmal state of the fish tank in order to keep Mags out of the loop and also to sound cool.)

The message this morning was, “The swimmer has drowned.” You’d think my brief stint at the Disney aquarium would’ve prepared me for taking care of fish in my own home, but this just isn’t so. Poor, poor Dorothy. May she ever rest in peace.

At this juncture we’ve just turned the light out in the ‘ole fish tank and stopped talking about fish in general. I doubt that any replacement fish will be purchased before some serious researching has been done. Hubz has already started on it, so I’m sure we’ll learn far more about fish than we ever wanted to.

At least the girl has her dog… 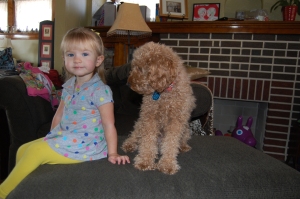 Come to think of it, he looks a bit suspicious there, doesn’t he?

Don’t you worry, folks. We’ve got the very best investigators looking into it…

6 thoughts on “…Sleeps With the Fishes”

In case no one has remembered to tell you this week…
Nothing special or curated about this picture other than to say, I’m quickly realizing these fools are a little harder to pick up lately. I will probably never outgrow the urge to scoop them up and press their hearts to mine when they first get out of bed in the morning.
Yesterday I was just off. Disregulated, overstimulated, exhausted, blah…I just wanted to burn it all down and walk away.
Anyone need a sweet little giftie for their Valentine?
Came home from work to find two boys helping each other with spelling.
Just finished my very first crochet project ever and I’m realizing I’ve become rather attached…
Join 215 other subscribers
Follow ohblessyourheart on WordPress.com