Oh, my law, guys…it has been far, far too long! Hopefully absence makes the heart grow fonder, but regardless, it’s good to be back!

Between family visiting from Texas, the Stomach Bug From Hell, a road trip to Tampa for our best friends’ wedding, a visit to Disney, and a road trip home featuring “Return of the Stomach Bug From Hell”, we’re pretty much exhausted. And some of us are still ashamed of the number we did on a gas station toilet somewhere in West Virginia. But then, others of us feel that it was in retribution for the rock slide in West Virginia that caused us to be stuck on the highway for three hours with a two-year-old and a ten-month-old. Fair is fair, folks.

So, here are my observations from our trip:

1. Pack with ziplocs. I wish I could remember where I saw this idea so I could give the genius credit, but I can’t hunt it down. Anyway, one of my biggest pet peeves about packing for kids is that all of their things are teeeeeeny tiny, so when you remove one shirt, everything else falls over or unfolds and you’re left with a bag full of chaos. So, the idea is simple: put an entire outfit, shirt, pants, undies, socks, hair accessories, everything you’ll need for a day in a ziploc bag. This way you can see which outfits are which and you don’t have to rummage around for thirty minutes trying to find socks. I ended up using a lot of plastic bags, however, I figure if they’re only holding clean laundry, we can definitely reuse them when we get home. So, here’s what nine days of travel for our two little ladies ended up looking like:

This method was also nice since it allowed us the ability to grab an extra outfit to take in the diaper bag in case of accidents, emergencies, whatever. I’m definitely doing this again!

2. It is 100% possible to traverse the country with two kids under the age of three without the use of electronic devices. Boom shakalaka. Seriously, guys, this is completely doable. Mags got carsick the one time we tried to show her a video in the car so from then on, we’ve avoided traveling with dvd players like the plague.

Now, let me say this. I am completely aware of the fact that we’ve been blessed with good travelers. I know that not all kids are cool with being in the car for a zillion hours, or even thirty minutes. My poor mother-in-law was forced to sit beside her youngest on car trips in order to cushion the blows he gave himself by bonking his head against his car seat over and over and over again. Which explains a lot about my brother-in-law.

We’re very fortunate that we’re able to load up our phones with tunes and get through the hard times that way. I will say that we listened to a looooot of songs on repeat, but at least the kid has good taste and likes The Muppets soundtrack. (Jason Segel, I am forever in your debt.) We also packed an awesome bucket full of coloring pages, books, small toys, and a few Target dollar aisle surprises that were dispersed along the way. We played a lot of “I Spy” and “Would You Rather” which consists of questions like, “Mama, would you rather be an elephant or a house?” Were it not for the three hour rock slide delay, I think we’d have made it both ways without any meltdowns. Regardless, it was a great trip and I’m so glad we accomplished it without Angry Birds or Fruit Ninja or Leapster, etc.

3. I love Disney World. And I love this picture I forced my family to take.

For those of you who don’t know, my husband and I met while on an internship at Disney’s Animal Kingdom. This picture was taken in the exact spot where we spoke for the very first time, and I thought, “Hey, this guy is pretty funny!” (And then I stalked him until I made him mine…mwuahahahaha!)

At some point we’ll collaborate on a “Traveling to Disney” post to share some of the things we’ve learned from being cast members in different parts of the parks, etc. Anyway, here are some more pictures from our quick trip! 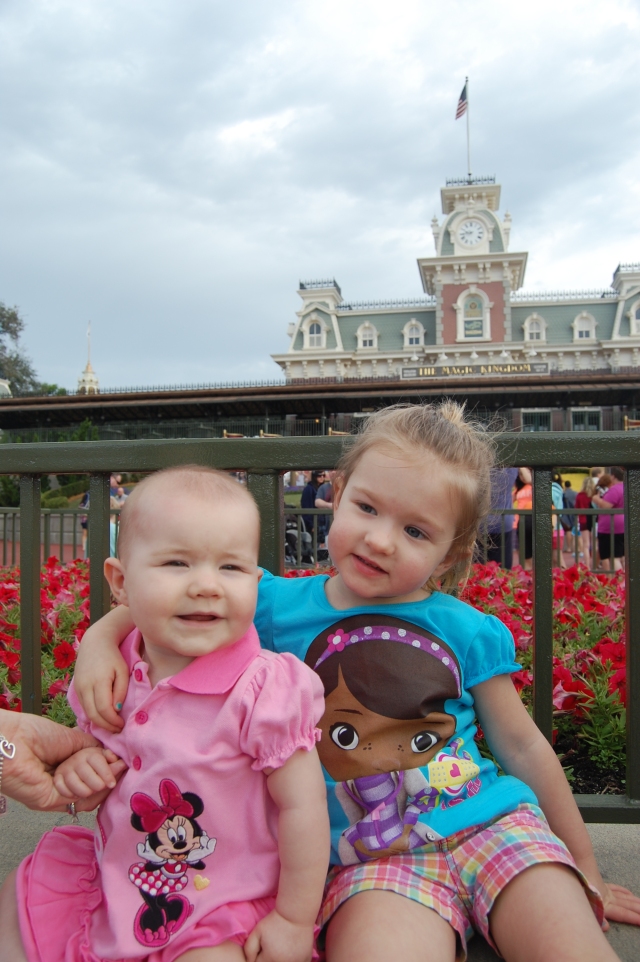 4. I laarve weddings! Especially when they’re the weddings of two dream boats like these two…

5. Thanks for sticking around!  Seriously, I’m so grateful for all of the people who sent me messages to encourage me to get back to blogging. Sometimes it’s hard to get back in the habit of something…even if it’s something you enjoy immensely. So, yeah…much love and thanks to all of you!

This guy wanted a toy Bulbasaur but had no funds. So we struck a deal that he’d unload the dishwasher for three weeks to earn it. He legit never complained, worked so hard, and was super happy to get it today. I’m just real proud and he’s precious the end.
The fairies have been water coloring their way across the leaves. Little boys who are caught up in the tumult of their family moving morph into little gremlins who must be taken for walks “all by ourselves.”
Ohmygosh, local friends come buy all our stuff so I don’t have to move it, kthanxbyeeeeee
One afternoon a few years ago I heard a knock at my door. Two women stood outside waiting for me to open up. All four kids had hand foot and mouth. I looked like a woman whose children all had hand foot and mouth, which is to say I looked like absolute hell.
Some days the lesson plan goes careening off course in the absolute best ways.
Thoughts and prayers. I’ll be praying for you. You’re in our prayers.
Follow ohblessyourheart on WordPress.com