I like to tell my kids this is a benevolent dictatorship…and I kind of run a communist style ship around here, if I’m being honest. Everybody shares everything, too bad if you don’t like it, no soup for you, I’m not sorry.

So, seeing as I’m basically my family’s Vladimir Putin and all, I thought I’d take a little time to charge some folks for some war crimes. As one does. 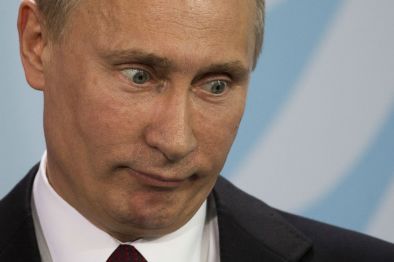 Charged with Inciting Panic. You know that hour right after dinner when you’re completely exhausted from being an adult all day and the act of pretending like you’ve got your life together is really taking its toll? You know…it’s the hour when you feel as though all the life blood has been sucked from your body by a parasite and you’re about to fall into an unbathed pile of exhaustion. This is the hour in which she strikes. She will sneakily lure unsuspecting younger siblings to the stairs and whisper potty jokes to them, convincing them that screaming “poopy diaper head” in the faces of your dinner guests is a good idea. She will laugh maniacally while forcing you to listen to yet another knock-knock joke. Under the guise of entertaining her little brother, she will start a game of “chase” in which someone most certainly will be tripped and maimed. She will insist on leading the others in illegal games of “jump all over the damn couch even though Mom told us eight thousand times not to” and “let’s all violently wrestle until Lily’s hair gets pulled and she shrieks like a banshee.”

"I thought snow face was a good idea." #apparentlynot #welastedfiveminutes

Charged with Harassment and Stalking. She’s kind of the least offender because I truly believe that her intentions are pure…but she’s always there. She’ll demand to help with every single task ever of all time. Have some strong chemicals you want to clean with? She’ll pour. Have a sharp knife you’d like to chop with? She’ll show you how it’s done. Have some detailed sewing to be done? She’ll hold the needles. Have to finish your taxes? She’ll file ’em for ya. Have some sleep you’d like to get? She’s in your bed. However, if you actually ask her to help with a task she’s so uninterested it’s not even funny. Chores to be done? Nah, she’ll sit an observe the other fools and cry rather than comply.

Also, she’s an accessory to every other crime committed. She’s not usually the mastermind (…yet. Kid’s brilliant, so once she realizes her powers I have no doubt that she’ll use them for evil), but she’s usually coerced into helping, so we’ll let her off with a lighter sentence and call it good.

Ev's bro game was on. point. at Mass today. His respectful silence, on the other hand, could use some work. #everettjohndaniel

Charged with Aggravated Assault. Even his hugs hurt. Gentlemen visiting our home are advised to wear an athletic cup in order to protect themselves from the colossal skull that will crush their testicles approximately ninety-seven times during their visit. Also, watch for flying dump trucks being launched down the stairs, blocks torpedoed toward faces, and strategically placed Hot Wheels that were definitely not under your feet a second ago, but most certainly are under your feet now that you’re carrying a lot of stuff. The perpetrator has been known to climb basically anything with an elevation of…off the ground. So, watch for falling boys, as well.

Also, while we’re at it, let’s charge him with Indecent Exposure and Disorderly Conduct. You know, for good measure. And ’cause he never wears pants.

Charged with Disturbing the Peace. Bro doesn’t sleep. Or rather, he sleeps, but only long enough to give you the illusion that you’re going to be able to get something done. He’ll nap juuuust long enough for you to get right into the deep disgusting middle of finally cleaning out the refrigerator and then he strikes. It basically goes on like that ad nauseam.

Alright, so that’s my legal work done for the day. Time to go dole out punishments! Mwuahahahaha!